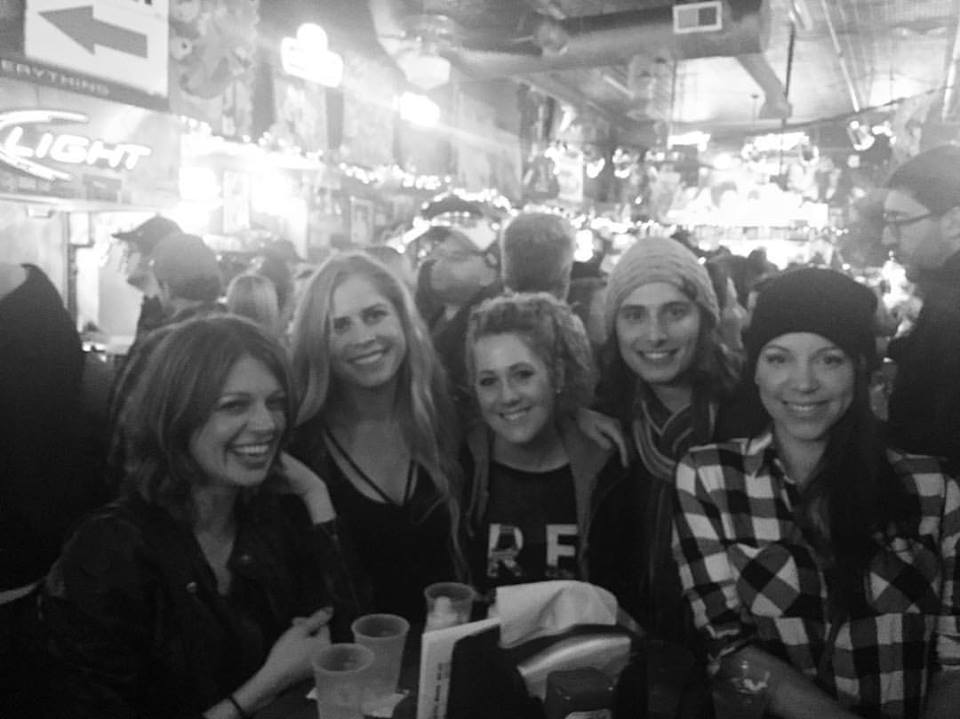 I like my friends how I like my music, diverse and in abundance, and I was thankful to ring in 2017 with lots of both. Two sales execs, a yoga instructor and a chef road trip it to Nashville to visit a singer/songwriter for New Year’s Eve.  With one deep in contemplation writing haikus in the backseat, one balancing her checkbook, and another twerking out the passenger window, I had no concerns.  Except:

I hope Amy and JoAnne are okay that I testosteroned our girls’ trip by the last minute addition of my friend Max, whom they’ve never met. Total girl foul.

I hope Max doesn’t pick up that they might not be. Because we’ve got 4 days and 760 miles of road together.

I hope they don’t mind sleeping in the same apartment. Because my sister Katy can only sleep the two of us comfortably, while the neighbor lending us her apartment can sleep three.

What will we talk about? Besides Japanese poetry and popping, locking and dropping it.

What will we listen to? As it turns out, each other.

We arrived in Nashville late Friday night in a cloud of hazy, lazy travel stupor which evaporated into excitement as soon as we saw Katy run-walking (her usual method of transportation) from her apartment complex to help us unload. After quickly settling in and spritzing on some “had-a-bath,” we honkey-tonked out to the neon lights of Broadway, where we shared a fried bologna sandwich, a few dances (arguably defined), a lot of bourbon, and a relieving synergy.

Throughout the weekend, we shared much more, including family style brunches, mud baths (this calls for a later post), toasts, laughs, culinary masterpieces, secrets, fears, dreams, and an unexpected union. Our last night in Music City, exhausted from the preceding festivities, we rallied for one more Broadway adventure.  As we watched a country band belt out some old jams that took me back to high school days, I scanned the room and noticed I wasn’t the only person acquiescing to nostalgia.  How powerful music is, to summon memories and the emotions that they carry, to summon the spirit of comradery. If it wasn’t for music, Katy wouldn’t live here.  Without its music history, Nashville likely wouldn’t have ranked as a top New Year’s Eve destination.  Without Katy and that ranking, Amy, JoAnne and I might’ve settled elsewhere, and Max might’ve been less enticed to join.

On the drive home, I had that sad feeling that I recognized from when I was a little girl and got to have a friend spend the night and then after so much fun, they left the next day. It turned out I wasn’t the only one suffering the holiday hangover blues, so we decided to spend just one more night together in Columbus.   With the power of music heavy on my mind, I proposed we watch one of my favorite documentaries called “Alive Inside” about the effect music has on people suffering from dementia.

It opens up with a 90 year old beauty who, when asked questions, apologizes for not remembering the answers.  But after listening to Louis Armstrong’s “When the Saints Go Marching In,” she’s suddenly joyfully spitting off memory after memory after memory, her eyes twinkling, testifying, “I didn’t know I could talk so much!”  The viewer witnesses many more patients seemingly come alive through what the philosopher Kant calls “the quickening art.”  A little Cab Calloway and a dormant patient named Henry fills with so much excitement he can barely keep his eyes in his sockets.  After listening to “Can’t Take My Eyes Off of You,” a husband who didn’t recognize his tearful wife looks across the table at her and tells her that he loves her.  A 10 year patient named Denise, while listening to Schubert, pushes away the walker she’s been using every day for the past two years, to dance.  Vistas open up.

We learned that this phenomena exists because the parts of the brain involved in remembering and responding to music are not affected too much in Alzheimer’s or other dementias,  and this is due to the way music enters  our brains in the first place.  Music activates more parts of the brain than any other stimulus.  It’s a cultural intervention, a narrative of our lives, living in the cerebellum not just auditorally, but also visually, and emotionally. It records itself in our motions and emotions when we’re young, which are the last parts of our brains effected by dementia.   And it starts in the womb.  Our brain, the engine of our organs, seeks union at six months, which is when the cerebral cortex can support thought.  Studies show that the patterns of the cries of newborns reflected their mother’s speech, which means that even before we’re born, we’re learning how to sing with another human being.

Music moves people, to memory, to action, to my favorite kind of tears.  I have yet to leave a symphony without a wet eye and a belly full of intense awe. For the patients in “Alive Inside,” the music, through memory, reawakens their souls, restoring a sense of freedom, choice, control and independence that the illness robbed them of. The narrator states, “We need music.  It awakens in us our most profound safety; the safety of living in concert with each other, and with our own selves.”

I’ve included the “Alive Inside” trailer in this post, in case you’d like a further glimpse. It’s one of those perfectly sad, perfectly beautiful, detoxifying feel goods that, combined with a hot cup of tea or a full bodied glass of wine, can melt away your wintery, Sunday blues, remind you of your blessings, inspire you to do something,  and make you feel like the good person you are.