They’re kind of funny, right?  Some go in, some go out, and like the rest of our body composition, we had no say in how it would all turn out.  They’re just this retired little hole in the middle of our torso, once at the mercy of the doctor’s bunny ears.

When I was a little girl, I wondered if I untied my belly button knot, would I immediately float away, tumbling over the waves of the wind like a birthday party in escape?  It made me giggle.  A fun visual in the racing imagination of a child; deflating, somersaulting, high up into the freedom of the open sky.

Before she passed, I often still gazed at my belly button, fascinated that not only did she grow me, but literally connected to me, gardening me from her very body.  After she passed, I started looking at it daily, aware of a phantom pain, desperately longing to reconnect.

Around the age of 5, new neighbors moved in to a dazzling, earthy, red/brown home that our Uncle Dave had built behind ours.  Parents to a darling, blue eyed baby girl named Alexandria, Gene was a handsome Hungarian pilot, and Pam was what I interpreted to be a beautiful Hawaiian princess, but in truth was a beautiful German/Native American artist, and a very talented one at that.  I quickly grew fond of them both, learned when Gene got home from work, and daily, met him in his driveway to give him the daisy I had just plucked from his yard, as he grinned from ear to ear; one of my earliest, sweetest memories.

This was short lived.  Just as their lives were unfolding, Gene’s was tragically lost, and young Pam and baby Ali’s were unfairly altered.  A plane crash, a life crash, and no choice but to wade through the debris. Later in life, Pam went on to lose a sister, nephew, and best friends, all within the pitiless strangulation of unexpected tragedy, all while singularly raising a sweet baby girl into a refined young woman, and keeping her advertising business afloat through the waters of loss.

Amidst it all, their family of two and our family of five became seven. Luke mowed her lawn, plowed her driveway and fixed the broken stuff.  Dad read consumer reports to help her make the purchases you need to make as a single woman in the country, and tried to fix the broken stuff.  Mom and Pam, both survivors, developed the deep country, neighbor lady friendship.  Katy and I babysat Ali. Pam listened to me rattle on.  We found reasons to laugh and be thankful.  A grace softly settled.

Summer breaks were especially memorable during which I came to watch Ali while Pam, suited up and striking, went to the office.  I would wake up in the mornings around 7, ride my bike back to their house, let their manic border collie Ginger out, lay in bed with Ali, watch an episode of Rugrats, and breathe in the sweetness of Pam’s lingering perfume. Then I’d roll myself and Ali out of bed, get her dressed, pour us Lucky Charms, and help her (make her) do her chores, before we dashed off into the adventure of the country summer. At night sometimes, when a man was lucky enough to secure a date with Pam, Ali and I would eat popcorn and watch movies until she got home, the scent of boredom on her breath.

The winters were full of sled riding, snowmobiling, ice skating, three months of Christmas, movies, Stromboli, grilled cheese sandwiches with tomato soup, and hot chocolate.  We attended each other’s holiday events, and swung on porch swings together after long days.  Pam has recollected to me so much about my childhood that I don’t recall, like how I’d show up uninvited, walk into the house without announcement, dig into her cupboards without permission, and chat her ear off.  It was as much home to me as my own was.

While in the hospital last year, realization setting in that we would soon need to make a decision that children shouldn’t have to, I called Pam. She arrived in what felt like the click of Dorothy’s heels, and I somehow caught my breath.  She looked into my eyes, panic in her own, aware that this was my first great loss and no stranger to it herself. She kissed my cheeks and forehead all over as if she was trying to suck the pain out of my tears, and then drew me into her embrace holding me so tight I thought my belly button might pop, but it didn’t, as much as I wanted to float away from that hospital room to wherever my Mom probably already was, but thankful to be in the arms of the next best thing.

Recently, Pam suffered another loss, as she said goodbye to her own very dear mother. And while I can’t suck or drain the pain away, I can stand with her in the waters, daughter by hurting daughter, belly button by aching belly button.  To the toughest woman I know today, a modern day Job, Happy Mother’s Day, Pam.  Cheers to you, for all that you’ve given both voluntarily and not.  For giving so much life, and forgiving so much loss. See you soon for tears, beers and belly laughs. 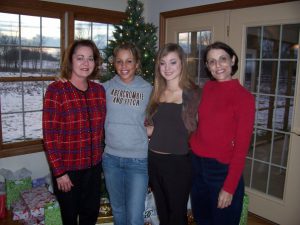