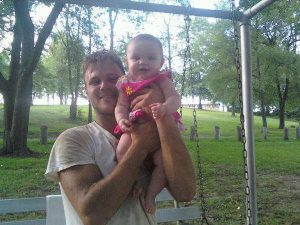 Today, we’re celebrating the Valentine’s Day birth of my favorite little person, my niece Isabella.  Eight years ago today, in anticipation of her upcoming arrival, I wrote the following piece on my brother/her father, Luke.  Those of you who know him might enjoy a few laughs.  Those of you who don’t know him, might want to.

My Brother, the Snowman

He sports very necessary steel-toed boots, a pit-stained, once white t-shirt, and care-free torn up jeans.  He ran out of shampoo a week or so ago, and he coulda sworn he had one more bar of soap left.  His paws are as massive as the grizzly’s, but as intricate as the man’s.  They’re as rough as the laborers, yet as gentle as the brain surgeon’s.  He could go rounds with a mother mountain lion, and then cradle a baby kitten, and would do both if given the chance.  The ever-present calluses give away his labors.  The beds of his fingernails provide ten promising trundles for grime to rest, and he almost always has a blood blister, which baffles me, as I can’t picture him screwing up.

If the day is just a teeny bit dry and arguably warm, he jumps onto his motorcycle, conveniently forgets his helmet, and lets loose his tricks, ignoring the speedometer.  He worries his family sick, but wastes no concerns on himself, or on the flashing blue and red lights that he just left in the dirt again.

His muscles swell from beneath the cotton of his off-white t-shirt, but he doesn’t have a gym membership, nor any weights in his home.  His strength of mind matches his strength of body.  The only thing Luke can’t do is be wrong.  On the numerous accounts I’ve told him he’s no longer my brother, he has unhesitatingly refused to comply.  His temper mirrors his reliability.  I know when and which buttons not to press, and have learned the virtue of patience, at his mercy.

His eyes are a mystery to most, but not to me.  I’ve swam in them for twenty three years, but not just anyone can dive into these pools.  These very same eyes have pierced the daylight out of many a questionable prospect pursuing my affection, with their suspicious and knowing gaze.  “I know guys, Joanna.  He’s a fucking loser,” he states as he farts unabashedly, and then compliments the interaction with an “I dare you to say something about it” challenging grin.   For his little sister, when it comes to men, the bar is high and uncompromising.  When it comes to her nasal cavity, not so much.

When our conversations become questionable, we swear on our “brothership and sistership,” and he probably believes that those are words.   He says funner a lot, and if others are involved in the dialogue, I don’t correct him.  What a shame it would be for the other parties to miss out on the company and conversation of such a character.  He can laugh at himself, too, but those days are in the presence of those lucky enough to earn his trust.  Those days, he doesn’t stop laughing.

He knows more than one might assume, if only considering his vernacular; from politics to sports to mechanics to current events, he is fit for all conversations, and will enter them, invited or not, whenever the right nerve is struck.  He has quite a few sensitive nerves, but it’s hard to tell when you bump into one, as the tone and decibels of his voice make it hard to tell if he’s angry, excited, or hard of hearing.  He’s not hard of hearing.

At the dinner table, as Dad prays, I sneak a peek at his bowed head just in time to see the hidden dimples submerge into his cheeks, as the corners of his mouth head north in response to my toes tickling his shin under the table.  Don’t laugh, Luke.  He snickers under his breath and squints his eyes open a bit, head still bowed, just in time to briefly catch mine before they close.  This momentary eye contact broadens his smile, as I steal one more peak before Amen.

He’s always loved basketball with a passion, and was the rock of his team up until the 9th grade.  He didn’t like the coach, so he quit.  Some say he has a problem with authority.  He argues that he has a problem with people who know less than him and try to teach him what they never knew in the first place, the idiots.

Never will you find his refrigerator void of Budweiser, except for when he’s struggling and financially forced to resort to Busch.  When he’s really financially struggling.  His craving is for the taste, not the intoxication, although I’ve seen him lose his balance once or twice, and heard two or three words magically morph into one, a few times; new words he would later argue a Webster admission case for.

He loves to please and takes great pride in barely singeing the outsides of a well-seasoned steak, before serving it to his guest in a pool of its own blood.  Everybody loves it.  If he does it right, his guest won’t need A1 Sauce.  He doesn’t own A1 Sauce.  “Do you like it?  Is it good?  Whadya think?  How is it?  That’s a fuckin’ steak man, huh?  Have a Bud.  You need a Bud.”  We all need a Bud.

We have a special relationship, in due part to our shared senses of humor.  He stops over to my house on a dangerously snowy night in the early winter of 2009, his snow plow leading Walker’s truck, and I tell him of a very important revelation I just had.  “Since people who work on the police force are called policemen, and people who work for the fire department are called firemen, technically, you are a snow man.”  I watch the dimples emerge again as he lowers his head and his giggles turn into heavy laughter.  He mutters, “Joanna, you’re so gay!”  while scratching his crotch, which I only barely notice anymore.  We both laugh, never ashamed to laugh at our own jokes.  We wouldn’t tell them if we didn’t think they were funny ourselves.  Then he heads out into the bitter night to plow the glacial snow for the next thirty hours, having had no sleep for twelve hours prior.  He doesn’t get to my driveway until the end.  I’m already snowed in.

Luke and his girlfriend, Bri will become the parents of a lucky little baby girl named Isabella this Saturday, Valentines Day, 2009.  This unexpected blessing only shook him for a moment.  He will figure it out, as he has figured everything else out, from building tree houses to building mansions, fixing toy trains to fixing cars.  He could play the hero in any fantasy action movie.  He is already a hero in reality.  He does not, will not mess up, excepting the blood blister rooming with the grime under his left thumbnail. 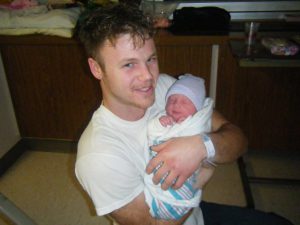